Home Blog with Moshi What's behind Apple's screens? A guide to display technologies.

What's behind Apple's screens? A guide to display technologies.

Have you ever thought about just what has gone into making your Apple device's display look so good? Confused by terms like OLED, LED, and LCD? Apple has consistently declared its MacBook, iPad, and iPhone displays to be some of the best in the industry, with clever technology and even better marketing. In this second installment of our deep dive into the world of device screens, we explore the various display technologies used by Apple across their device range to help you better understand how they work and why they provide optimal performance for each device.

You've probably heard of LCD before; manufacturers including Apple have been utilizing LCD screens in one form or another since the very early days of portable computing. On a very simple level, LCD displays work by passing a bright white backlight through light-distorting crystals to produce various colors and intensities, which when put together as an array of pixels produces images.

Apple has favored LCD technology for most of its large-format displays (larger than 7 inches), having doubled down on perfecting LCD rather than switching to other formats. In bigger displays, LCD strikes a good balance between cost and performance and is likely the main reason Apple has stuck with the same technology for such a long time. Throughout the life of both the MacBook (including Pro and Air), Apple has stuck with a relatively standard Retina display and a lower pixel density compared to its other products, considering that the average MacBook user views the screen at a significantly greater distance than they would for an iPad or iPhone. For the iPad however, the company has worked on improving two particular aspects of its LCD displays in order to maximize display quality; refresh rate and backlighting. For a more in-depth look at Apple display development, check out our ultimate guide to iPad displays.

Refresh rate refers to how often each pixel changes, affecting the smoothness of images on the screen, which can be particularly important when viewing fast motion or when scrolling. LCD displays on laptops such as MacBook Pro and MacBook Air have remained largely unchanged at 60 Hz throughout the life of the product line, but the same cannot be said of the displays used on other Apple devices. The first iPad had a screen with a refresh rate of 60 Hz, but the second generation of the iPad Pro in 2017 (iPad Pro 10.5-inch 1st-gen and iPad Pro 12.9-inch 2nd-gen) upgraded to a variable refresh rate ProMotion display, capable of dynamically adjusting the refresh rate up to 120 Hz depending on the type of content being displayed. The key benefit of ProMotion is the ability to improve image quality when required, but fall back to a lower refresh rate in order to reduce power consumption when high performance is not required. iPhones with LCD screens have seen little change in refresh rate, with a maximum refresh rate of 60 Hz.

Lighting that's got your back

Backlighting is arguably where the iPad screen has seen the biggest advances, allowing it to display more vibrant images with brighter colors and higher dynamic range. Early iPad models used a small number of LED modules to illuminate the screen; only a couple on the iPad 1 and 2, and around double the original amount on the iPad 3 with Retina display. Later generation iPads used arrays of up to 72 LEDs, allowing for independent dimming of different areas of the screen to alter color intensity or darkness. Apple's latest LCD upgrade comes in the form of new Liquid Retina XDR display which was included in the iPad Pro 12.9-inch announced in April 2021. Liquid Retina XDR uses over 10,000 mini LEDs broken up into more than 2,500 individual zones to backlight the LCD screen, giving even more precision when it comes to the dimming and brightening of specific areas. The result is greater contrast (the new screen boasts a contrast ratio of 1,000,000:1) for brighter colors and truer blacks, and also higher brightness (1,000 nits full screen/1,600 nits peak) which can be especially useful when viewing in bright environments such as outdoors. 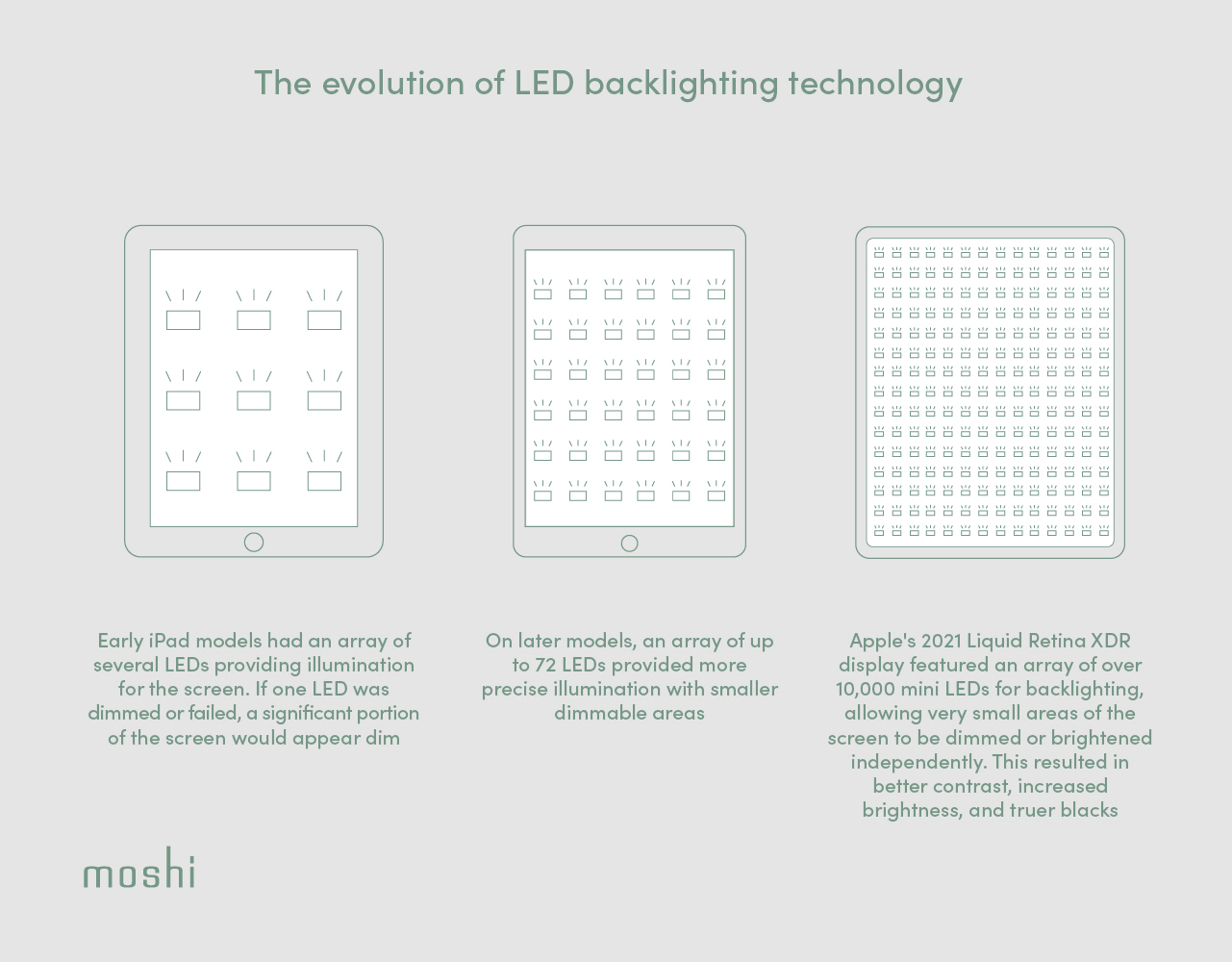 The other major competing display technology is OLED (Organic Light Emitting Diode), with several other variants based on the same underlying concept. While an LCD display passes a white backlight through crystals to create colors, each pixel in an OLED display is a tiny LED capable of emitting its own light without the need for backlighting. Apple has included OLED screens in flagship iPhones since the iPhone X and in all generations of the Apple Watch, so its no stranger to using the technology. You may even be surprised to learn that the Touch Bar on the iPad Pro is actually a long, thin OLED display. 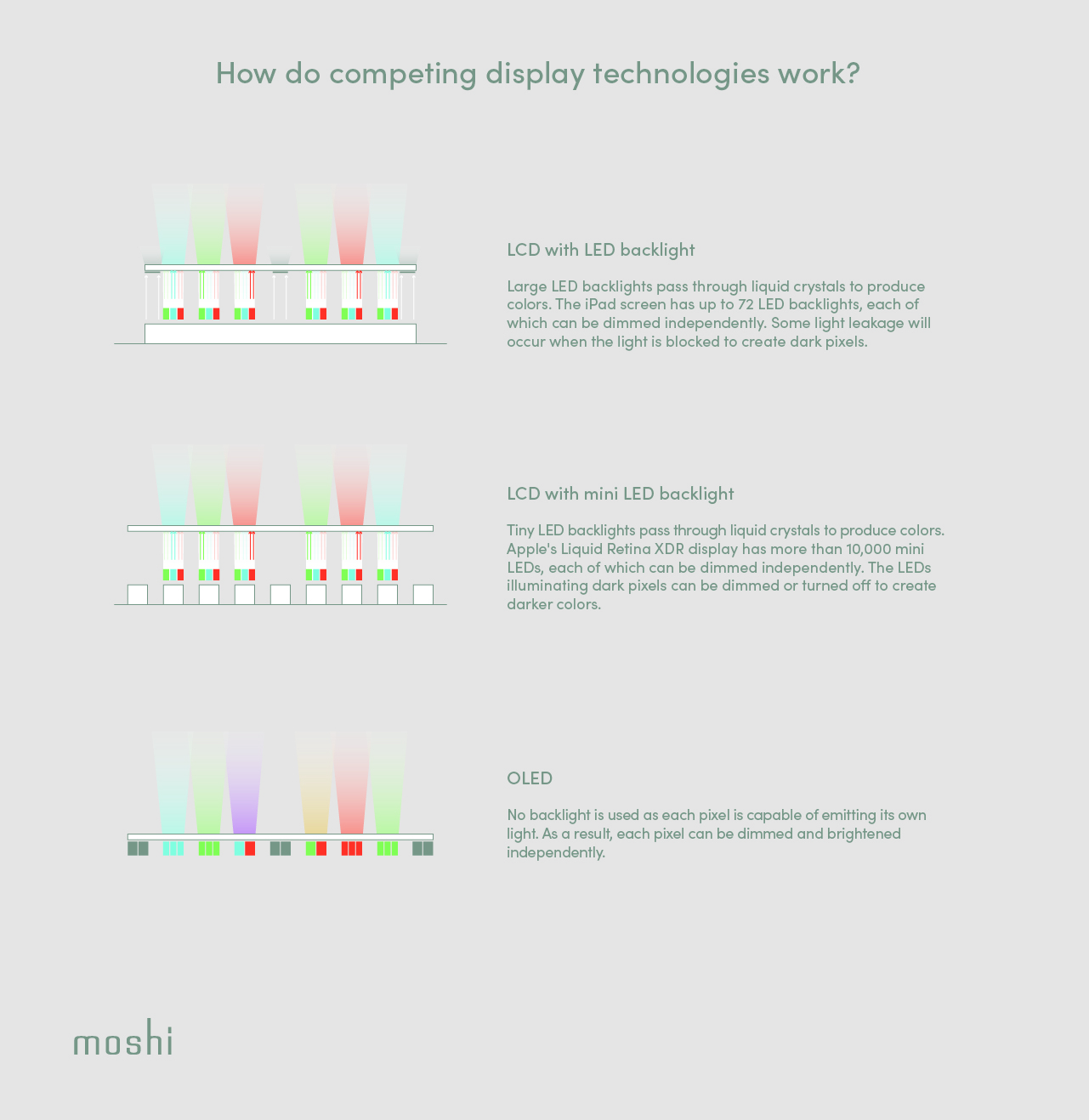 The main challenges in utilizing OLED for larger-format displays such as iPads and MacBooks are in terms of cost and efficiency. High-quality OLED displays are expensive to manufacture—and given the size of screens like that of the iPad Pro and MacBooks—are probably prohibitively so at present. Second, OLED displays consume more energy than LCD displays when the entire screen area is being used, especially at high refresh rates. If Apple wanted to match the industry-leading 120 Hz refresh rate of its current large-format LCD screens using OLED, battery life would certainly take a hit. Rumors have been circulating since late 2020 that Apple is preparing to launch an OLED iPad in 2022, but with the current quality of their LCD solutions, it is understandable why the company may be in no rush to abandon the technology which has served them so well over the past 10-plus years.

Within OLED there are several variations on the underlying technology which apply additional components to improve aspects of the display to suit specific use cases; you may have heard of some of these, with their intimidating acronyms such as AMOLED, PMOLED, and LPTO. In the case of LPTO, Apple has in fact been able to combine aspects of OLED and LCD technology in its Apple Watch (4th-gen and later; not SE), allowing it to achieve an always-on screen while minimizing power consumption. This same technology is currently rumored to be planned for use in the screen of the upcoming iPhone 13, however this is yet to be confirmed.

The displays on Apple products have always impressed us at Moshi, which is why we've worked so hard to create protection solutions that not only help preserve the screen's pristine condition, but also allow the full beauty of the images to shine through as Apple intended them. Our designs have evolved constantly in-line with successive MacBook, iPhone, and iPad models, with each iteration requiring careful development to ensure that the screen's enhancements and new features work perfectly while still being protected from damage. Moshi's award-winning protection solutions are precision-designed, with models available to suit a wide range of current Apple devices. Find the right accessories for your specific model with our Shop by Device tool at moshi.com.

Your cart is currently empty.

You have successfully subscribed!
This email has been registered
Close
Newsletter